The rain forest of the Amazon River - the largest river on earth - is habitat for numerous indigenous tribes, some of them being still uncontacted by civilization. We present you here three tribes of the Amazonas Rain Forest who live in the state of Brazil: The Piraha, the Matis as well as an uncontacted tribe.

Daniel Everett has lived in the jungle with the Piraha tribe during many years. Nobody can explain to us the unique culture and mind-working of the tribe better than he can. He went out to meet the Pirahas in the eighties as a missionary, intending to bring to the tribe the Christian faith. But things turned out quite differently: The permanent contact with the tribe turned upside down all his basic beliefs. Here is his story.

Similarly, the anthropologist Dan James Pantone is an expert of the Matis tribe which he calls the “Jaguar People”. He too shared his life with the tribe for many years, although for scientific reasons. He writes: “I originally never planned to live permanently in the Amazon. However after meeting the Matis tribe, I could not bring myself to leave and chose to remain in the Amazon where I have been living for the last seven years. The Matis Indians are so interesting and so wonderful that I decided to take this opportunity of a lifetime to study them. I realize that a few generations from now that they may change and be absorbed by western society, no longer practicing their ancient way of life. Here was my chance to know the Matis tribe, the last of the hunters, and through them learn how our ancestors were. After spending many years researching them and related tribes, I can tell you that they are very nice people and have a society that in many ways is healthier than so called civilized societies." Dan James has manufactured footages of these fascinating people and gently has allowed us to publish some excerpts on our Andaman Website.

FUNAI (Fundação Nacional do Índio) reported that it had confirmed the presence of 67 different uncontacted tribes in Brazil, up from 40 in 2005. With this addition Brazil has now overtaken the island of New Guinea as the country having the largest number of uncontacted tribes. “Survival International” explains us, how to interpret the photos of a recently discovered uncontacted tribe in southern Brazil.
Video clips of indigenous tribes in the Amazon rain forest 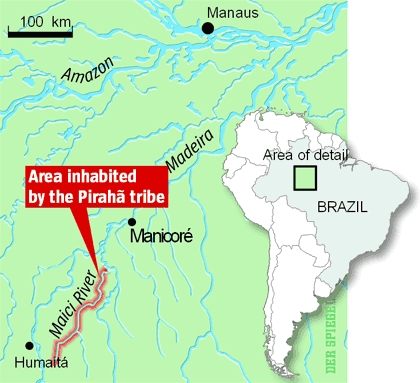